Using The Jesus Prayer In Daily Life: A Powerful Practice 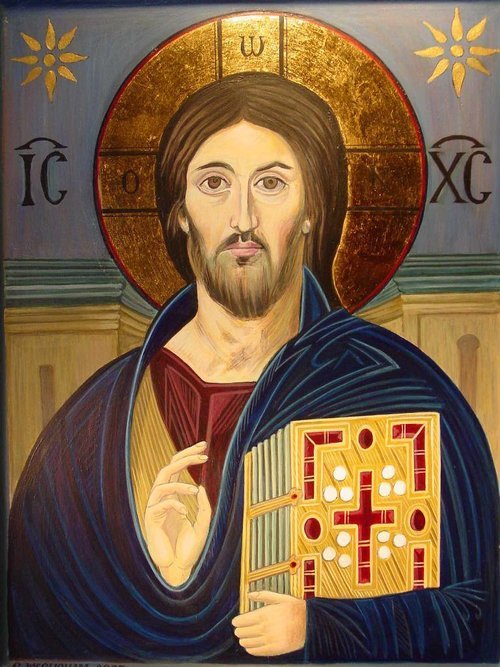 I’ve found that using the Jesus Prayer throughout the day can be a simple, contemplative practice that has a powerful effect. The prayer goes back to the Eastern Orthodox spiritual fathers, whose collection of texts, The Philokalia, outlines many mystical practices used by hermits of the early church.  The continual practice of the Jesus Prayer, or Hesychasm, can be traced to the Gospel of Luke (Ch. 18), in the story of the Publican and Pharisee.  The thinking beind it is that God’s presence resides chiefly in His Holy Name.  But unlike Sanskrit (Hindu) mantras, where spiritual power exists in the syllables and sounds themselves, the Jesus prayer derives significance from its meaning, so practitioners are encouraged to say the prayer in their native language.

Though entire books (and even extensive theologies) have been written on this prayer, and different mystics  use different paradigms, I offer a simple four-part process here based on my own experience of the prayer’s natural progression.

1. Recited aloud prayer. The purpose is to fully integrate the prayer with your entire being, your entire soul.    This begins with simply speaking the prayer aloud, which naturally involves hearing yourself recite it.  Though a completely mindless repetition of words is discouraged, repeating the prayer aloud throughout the day (when you are in place comfortable saying it aloud), can initiate the process of familiarizing your entire system with the prayer.   It will make it easier to transition to the next step, giving your mind a stronger awareness of the prayer’s presence (and ultimately God’s Presence), when you  recite it silently.

2. Silent in the mind prayer. This is simply saying it silently, but the practice here is to begin feeling your mind (or inner spirit) move downwards into your heart, or chest cavity area.  Most people, when they sub-vocalize, automatically feel as if the words are coming from their head, perhaps right behind the eyes. The idea is to feel your kinesthetic attention drop from your head into your heart, so that the prayer arises  from your heart-center.  It is not metaphorical – just like yoga exercises that focus attention on certain body areas, the point here, again, is to focus your attention and sense of feeling in your chest and feel yourself saying the prayer from that area.

3. Silent in the heart.  Often referred to as “the prayer of the heart,” Eastern theologians (along with mystics of other traditions, too) emphasize that the heart is the center where matter and spirit meet, the gateway into the spiritual realm.  Hopefully, in the process of saying the prayer and moving your point of attention to your heart, you have developed a strong presence with the actual meaning of your utterance at this point.  Lord Jesus Christ, God Incarnate, is Himself present in your imagination or awareness as you say it.  Like one of St. Ignatius’ exercises in imaginative prayer, I often envision myself as a pilgrim in the Gospels coming to Jesus in need of healing, asking him, “Lord Jesus Christ, have mercy on me, a sinner.”

Also, certain breathing techniques and bodily postures can be used to help balance the prayer firmly in the heart area.  One such technique involves kneeling, or using a prayer stool, and literally bowing your head down to your chest and looking at your own heart. However, my own experience tells me that being comfortable is the most important thing in whatever posture or position one uses.

4. Contemplation. This is the highest stage when the prayer becomes one with your heart, and the practitioner prays the prayer without any awareness of words.  In a sense, a groove, or imprinted shape take form in your spirit where an existential pathway opens a direct channel between you and the divine.    I think of this as merely the indirect result of lots of practice, and of course, grace.   It can come and go, arrive and fade, known one moment and lost the next.  For this reason, #3 usually remains my focus, and I’ve never found it very helpful to “measure” or “evaluate” my own prayer life, like it’s a test.  After all, the point is not self-improvement, it’s simply to become closer to God.

While some monks go into their private cells and say this prayer hundreds of times, accompanied with prostrations, it can also be an easy practice for the lay-person to maintain in day to day life:  saying it aloud it traffic, saying it silently while waiting in a line, making it a part of you here and there, moment to moment, day by day.  It is one of my favorite practices in all of Christian Mysticism, and my favorite reading on the subject is the spiritual classic The Way of the Pilgrim.  It’s written in a narrative form, following the path of one man travelling and making the prayer his central focus.  It’s an enjoyable and easy read. I encourage anyone interested in using this prayer regularly to consider ordering it through the link below, as I have found it to be a good motivational tool.