The Place Of Unknowing 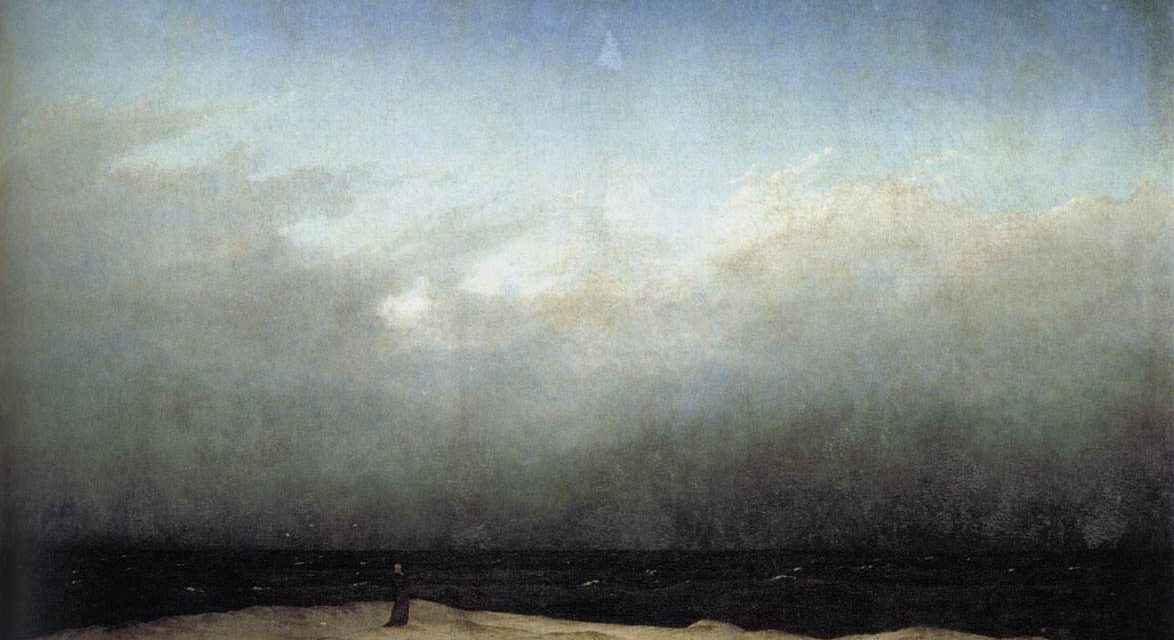 The muscles of my legs tighten as my feet sink into the deep sand. As I amble towards the edge of shore, I’m greeted with the taste of salt, sticking to the air that surrounds me and welcoming my arrival. Squabbling seagulls soar about in the distance as the murky curtain of the sky gradually dissolves, sunlight tinging the edges of once-menacing clouds. I feel like I am slowly expanding, as my ears adjust to the tumult of the crashing surf, and I begin to follow its cadence. In the cold breeze, the rhythm of my breath commingles with the music of the surf to become a ceaseless prayer as I become inwardly still.

I am drawn to the ocean in all seasons because of the need for a communion, which can be a form of prayer. The silent or spoken verbal prayer that I had learned in childhood was addressed to a God out there, whom I would hope to reach through words uttered in deference, as though confiding in a parent or some other figure of authority. But God is so much more than a parent, and with my discovery of Christian mysticism came the practice of apophatic prayer. Let us look briefly at apophatic and kataphatic theologies and prayer in both traditions.

Kataphatic theology, as found in the Franciscan and Ignatian traditions, contemplates the divine through symbols and images of the created world. Encounters with the divine always occur in the context of a specific place in this world, thus the intertwined nature of place and spirituality. Think of Yahweh’s appearance on Mt. Sinai, Jesus at the Sea of Galilee, or Paul’s conversion on the road to Damascus. Kataphatic prayer relies on words and images: Scripture, icons, song, and worship.

Apophatic theology, on the other hand, is rooted in the idea that God is incomprehensible and cannot be defined. This view is exemplified in the teachings of mystics such as Meister Eckhart and John of the Cross. Apophatic theology, recognizing the limits of understanding, reminds us that we cannot know God directly nor can He be bound by human effort to any place or thing. Thus, apophatic prayer is prayer beyond words, thoughts, and images.

Landscape painting has shaped the way we look at and think about the nature of place. In pictorial language, the naming and not-naming of kataphatic and apophatic theology can be equated to the representation of either things and places, or no-things and non-places.

Casper David Friedrich’s The Monk by the Sea (1808-1810) visually embodies the tension between metaphors of place and the negative theology of placelessness within the Christian tradition. A masterpiece of the sublime aesthetic, the painting illuminates the nature of apophatic prayer and points us to a deeper understanding of this contemplative tradition.

Painting in the nineteenth century commonly enacted a narrative, placing the viewer in the role of a spectator, watching events as though on a stage or through a window. Biblical landscapes would be laden with symbols of the divine encounter, infusing a specific place with spiritual meaning. Although it’s been rendered in an ambiguous way, the place where we meet Friedrich’s monk is in fact no less specific than any other in our world.

The site of the painting is Rügen, an island off the northeast coast of Germany, a location the artist returned to repeatedly to paint. The image doesn’t yield any geographic clues. The landscape is radically paired down, a flattened space dominated by horizontal bands of land, sea, and sky. A lone figure in a flowing black robe stands on a beach with his back turned to us. The curve of his form echoes the contours of the land. The undulating ridges and hollows of the beach seem flesh-like, as if to signify body and place fused into one. We can’t be sure if the figure in the painting is Friedrich or the pastor of Rügen, who was known to give sermons here. The artist as monk was a common German Romantic theme, as was the idea that nature is a book through which God is revealed.

Instead of offering us a narrative, the painting invites us to identify with the lone figure. From the dunes we look out as he does, over a vast, almost black sea. The empty horizon stretches out endlessly before us. Above, the sky is threatening, though it gives way to light at the top edge of the picture. Atmosphere becomes a subject in the painting, and the concomitant starkness of its representation shocked contemporary viewers and artists alike.

The sense of being adrift in this boundless space is a familiar experience for me. Navigating the landscape of Los Angeles, place and placelessness coexist in ways similar to this painting. From my earliest visits with extended family during adolescence, my mind had been imprinted with images of boulevards lined with palm trees, homes perched precariously on dramatic hillsides, deep canyons, and views of distant snow-covered mountains from the freeway. As a young adult, these impressions called me back like a siren song to settle in this extraordinary landscape. Something about the porousness of boundaries in Los Angeles suggested unlimited possibilities.

The sudden shifts and great scale of the region’s geography can bring about an experience of the sublime. Such majesty yields the same feelings of awe and wonder when one is confronted by the overwhelming presence of God in the landscape. In a similar way, Friedrich’s monk is isolated in a world that threatens to swallow him up. His tiny figure stands below the horizon, caught in the earthly realm between land and sea. He is powerless before a looming sky, as dark clouds descend along the edge of the water. The way the landscape envelops him is a metaphor for the surrender of self required by faith.

We can imagine the monk engaged in a contemplative apophatic prayer that reflects this objectless space. Lacking images or firm ground, his attention is fixed on the mystery of God. The subject of the painting becomes this experience, externalized in the form of a non-space, in which the individual dissolves into the larger flow of the divine.

Notably, the monk’s back is facing us, his identity hidden. Inviting viewers to stand in the shoes of his subject, Friedrich succeeds in communicating the impact of direct experience. He paints what the monk sees but captures an inner state as well. The combination of wonder and humility before nature is felt in part because of the composition of the painting and its lack of pictorial detail. Rather than illustrating a scene, the artist projects a state of being into a painted atmosphere.

An apophatic landscape is a place of abandonment. In scripture, the mystical experience often occurs in locales representing relinquishment and surrender: forests, mountains, and deserts. The barren landscape of the painting functions similarly. There is no focal point in the composition, and we are left to drift between states. Time is suspended somewhere between night and day. While the lack of boundaries suggests the infinite, the painting’s flatness also draws attention to its surface, creating a spatial disorientation. The elements of nature are rendered in flux and continue indefinitely beyond the edges of the picture plane. While the location is specific to the artist, in rendering it as only sky, sea and land it becomes universal, and thus placeless. God exists anywhere and everywhere all at once, concealed in the mystery of nature.

The sense of dislocation experienced while driving through Los Angeles, with its shifting terrain, micro-climates, and cultural layering, mirrors our society’s new order. Technology has exacerbated our displacement, as we connect with anyone from anywhere at whatever time we choose. Friedrich was part of a larger movement in painting at the time that sought to defy the encroachment of industrialism. Human attempts to control nature through technology would ultimately cause massive displacement of traditional communities. Part of Friedrich’s concern was with how to represent the spiritual in the rapidly modernizing society around him.

The acceleration of technology, a hallmark of the modern era, eventually led to a world in which we interact in fabricated environments that only exist on screens. While a sense of alienation has always been a characteristic of modernism, more than ever, placelessness has become our societal condition. Yet we long for home, and the mystical path accessed through contemplative prayer in the apophatic tradition allows us to find our true home in God wherever we may find ourselves.

Standing alone, I will watch the frigid, foaming water rush up to dance around my legs. Just as quickly it will recede, leaving my feet sunken and stuck in the soft ground. I am suddenly on Friedrich’s barren shore, body and place united.

I spot the solitary figure far off in the distance and begin fervently moving towards him, the sound of crackling sand under my feet. My breathing intensifies, and I can sense the pounding of my heart as I close the gap. I have come to join him in meditation before the rippling blanket of dark expanse laying before us. Together we watch the white-crested waves in the distance as they swell up and roll thundering towards the shore. Inhaling the briny moisture of the air, I feel it settle on my skin like gauze. The same substance is there in the distance, borne by the hazy charcoal-colored mist and clouds. Together, we gaze into an immeasurably deep gulf, drawing us into divine union at the edge of the world.

This essay was first published in Tiferet Journal, Autumn/Winter 2021: https://tiferetjournal.com/