Overcoming Unconscious Biases By Recognizing Ourselves In Others

It’s easy, especially, at the time we are living in to express opinions that are based on unconscious biases. We are not aware of it, but since childhood, we have been conditioned to view the world through our own particular lens.

Experiences that we have had and the knowledge we have accumulated throughout our lives serves as a filter through which we observe reality and experience life. That’s why we may express opinions that unbeknownst to ourselves may contain implicit biases against a particular race, gender, nationality, or religion.

To overcome these unconscious biases, it’s been helpful for me to deliberately imagine another person’s experiences. To see what they see. That only happens when we listen to their stories and locate the humanity in what they have experienced. When we recognize ourselves in each other, it’s hard to accept the stereotypes that have somehow de-humanized the other in the past.

When I see myself in you, even though you may be a total stranger and represent a completely different culture, it becomes harder to cause you pain, harm, or reduce you into a convenient caricature for my own purposes.

So what if we would just spend a bit more time listening to the stories of people who represent a different race, culture, religion, or political persuasion?

What if we identified with another person’s pain rather than judge them based on our limited view of them?

I’m convinced that so many of our problems, not just here in the United States, but around the world would have a better chance of being solved if we would only take time to hear what ‘the other side’ has to say.

It begins with me listening to them rather than telling them how to act and what to believe. It starts with me placing myself in their shoes and feeling the pain of what they have experienced.

Here is how that practically plays out for me as a white man. I ask my black friends to share their stories of discrimination, racism, and inequality. I want to know what they have experienced. I want to feel it deep inside so that their burden also becomes my burden.

Here is how it plays out for me raised a Christian. I listen to the stories of my Buddhist, Hindu, Muslim, and non-religious friends. I gain respect and appreciation for them when I get to know their heart.

Here’s how it plays for me being a man in a world where women have not been given the same opportunities. I listen to their stories of abuse, discrimination, and being marginalized in the workplace because it’s only then I can even begin to understand what they have experienced.

I could go on. But the point is: We can only truly see a change in the world if we recognize ourselves in each other. It’s the way of love. 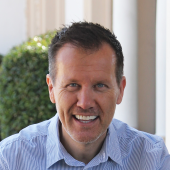 David Youngren is an international speaker and the founder of Juma’s World (a charity working with children in Tanzania.) His latest book, "Awakening To I Am Love: How Finding Your True self Transforms Your Wellbeing, Relationships, and What You Do" was published in November 2019.