The German mystic Meister Eckhart had some great words to say about the virtue of detachment.  Below is an excerpt from Eckhart’s writings, followed by a video presentation by David Cole.

Again I ask, ‘What is the prayer of a detached heart?’ My answer is that detachment and purity cannot pray, for whoever prays wants God to grant him something, or else wants God to take something from him. But a detached heart desires nothing at all, nor has it anything it wants to get rid of. Therefore it is free of all prayers, or its prayer consists of nothing but being uniform with God. That is all its prayer. In this sense we can take St. Dionysius’s comment on the saying of St. Paul, “There are many who run, but only one gains On Detachment 573 the crown” (1 Cor. 9:25). All the powers of the soul compete for the crown but the essence alone can win it. Dionysius says the race is nothing but a turning away from all creatures and a union with the uncreated.10 And when the soul has got so far, it loses its name and is drawn into God, so that in itself it becomes nothing, just as the sun draws the dawn into itself and annihilates it. To this state nothing brings a man but pure detachment. To this we may add a saying of St. Augustine, ‘The soul has a secret entrance to the divine nature, when all things become nothing for it.’11 On earth, this entrance is nothing but pure detachment, and when the detachment reaches its climax, it becomes ignorant with knowing, loveless with loving, and dark with enlightenment. Thus we may understand the words of a master, that the poor in spirit are they who have abandoned all things to God, just as He possessed them when we did not exist.12 None can do this but a pure, detached heart. 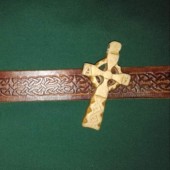 David Cole is an international Spiritual Teacher and Retreat Leader; he is an award winning author; ‘Explorer Guide’ for The Community of Aidan and Hilda – a globally dispersed Celtic New Monastic Community; and is founder of ‘Waymark Ministries’. Learn more or book him to speak at www.waymarkministries.com.