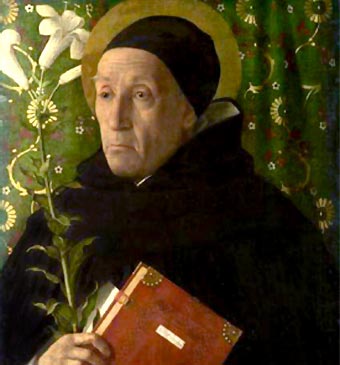 One of the most well-known and celebrated mystics from the Christian tradition is teacher and preacher Eckhart von Hochheim or Meister Eckhart. He had a wide and varied career, taught some controversial principles, and became touchstone for interreligious dialogue in the 20th century, especially given some of his Neoplatonist teachings.

Eckhart was a prolific theologian, preacher, and mystic who lived in the 13th and 14th centuries, so roughly the same time period as Dante Alighieri.

He joined the Dominicans, ironically the teaching order that sought to defend the orthodoxy of the faith through sound teaching.

Some of his teachings involve a God whose love spills over in overabundance. His teaching on the Unmanifested and the Manifest Absolute has been picked up and modified for a modern audience with spiritual teacher Eckhart Tolle, who changed his name from Heinrich to situate himself within the lineage of Meister Eckhart.

Some of his teachings seem to echo Eastern understandings like that of the Tao, emptiness, and non-attachment: “When I preach, I usually speak of detachment and say that a man should be empty of self and all things; and secondly, that he should be reconstructed in the simple good that God is; and thirdly, that he should consider the great aristocracy which God has set up in the soul, such that by means of it man may wonderfully attain to God; and fourthly, of the purity of the divine nature.”

He taught that each of us carries within us the divine spark but that it was ultimately “free of all names and void of all forms.”

Tried by two tribunals, one of theologians and the other of cardinals, Eckhart finally had some aspects of his writings declared heretical and some articles deemed suspect.

Interestingly when the Dominicans approached the Vatican to have Meister Eckhart’s status reinstated to full orthodox acceptance, the response was that Meister Eckhart was never considered heretical, only certain passages of his work.

Frequently held to be one of the iconoclastic mystics who suffered at the hands of an overbearing church, Eckhart died before the sentencing came, reached great heights of prominence and responsibility within the church, offered to defend his teachings in person and to recant if he could be persuaded of what was heretical, and had a community of the Friends of God, led by Henry Suso and John Tauler that advanced his teachings especially in German speaking countries.

Largely forgotten for centuries, his work was rediscovered by Carthusians in Basel, Switzerland in the 1960s and he has enjoyed prominent recognition ever since.