God With Us, God Within Us 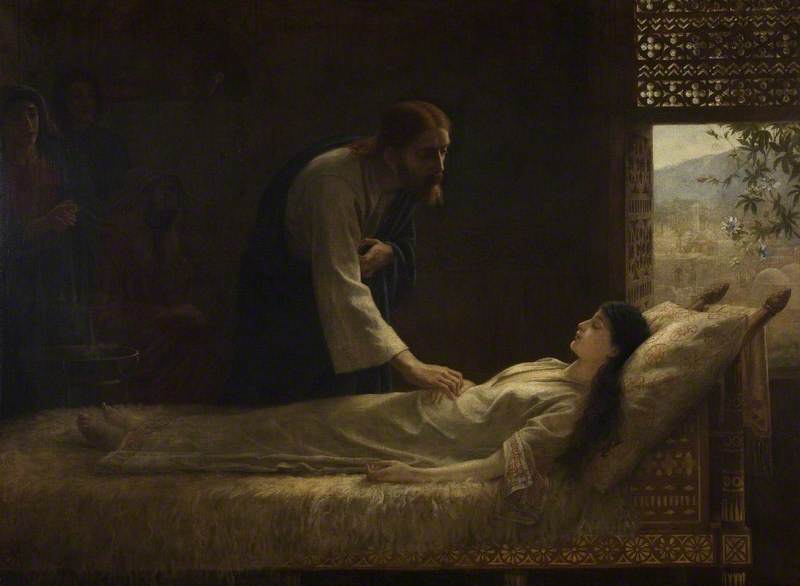 The physicians stared, their faces dark and grave. They furrowed their brows and prodded. They noted her pallor and handled her limbs. They burned herbs and applied salves. They all left confounded, stooped and eager to forget the girl wasting away in bed.

Her father’s heart moved with the sad traffic, rising with every arrival and sinking with every futile remedy. After the rest of the household accepted the inevitable, he set out.

Into the day he went, blinded by the sun. He cast himself at the teacher’s feet, pleading, weeping, hysterical. To his relief, the teacher agreed to come. Then the messengers arrived, working their way through the jostling crowd. “Death.”

The teacher continued, unfazed by the report. He went into the house and put out the laughing mourners. He then went into the place where the girl was, with its fresh and creeping chill.

There, light sprang up.

The story of Jairus’s daughter possesses several layers. The first layer is that of a miracle story. The controversial wonder-worker Jesus grants a desperate father’s wish, once again demonstrating an astounding and unsettling power over the oppressive forces arrayed against humanity. A cold and waxen girl rises, walks, and, if her parents followed Jesus’s instructions, eats.

In the second layer of the account, we find the greater Christian narrative, with its evolving promise of “God with us.” According to the arc of Scripture, the time between Christ’s resurrection and the cosmic consummation features the outpouring of God’s Spirit, the extension of Godself to the church and the person of the believer. This means Wind feeding the spark of Christ within. It means Father and Son making their home in the believer through the Spirit. It means God dwelling in us. The Christ who ventured into the house and into the girl’s room now ventures into us to heal.

Think about that for a moment. Consider all the talk about who God is, where and what God is. So much of it implies distance. Yet, whatever Christianity says about God’s transcendence, the faith also acknowledges God burning inside the believer, God near and implanted. This sort of scandalous proximity, like the notion of a God-man, makes the Christian faith what it is.

The third layer of the story concerns faith. Each of us, in the manner of Jairus, can entreat the teacher to heal, despite arguments to the contrary. Each of us can believe in the teacher inside, his fire kindled by the wind primeval.

That’s where a certain type of quiet comes in. The God inside has a positive character. Some silencing of the thoughts must occur to connect with this God, but a remote purity does not dominate here. There are no mountains to scale in some ascent toward the ineffable. Quiet only reveals something quite near and quite knowable, there to touch and be touched.

Today we can know the teacher, dead as we are.