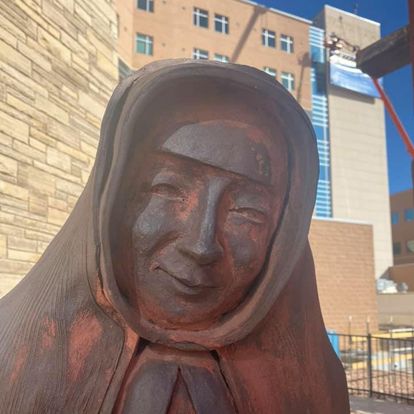 But would anyone recognize the things I see as God?

My friend Chett took a picture of himself
perfectly positioned at the base of a vivid rainbow.
“I’m so queer, I make rainbows appear from my hands.”
God is Chett–living his best life–and the rainbow.

Three women sat at a table making cards
for shut ins, and prayer shawls too.
“I need some glue,” the card maker said.
And some glue appeared. The shawls, the cards
and their makers: the incarnation of the divine image.

This morning I saw a robin in the green street.
I don’t think I’ve ever seen one there before.
A worm in her mouth. The grass had just been drenched
by the company that drenches the grass.

The worms were there for the taking.
Robin God. Worm God. Majestic. Vulnerable.
All God all the time. The robin found a puddle
made by the drenched earth. Holy. Holy. Holy.

Einstein, it is said, had a night sky theology.
I’ll take that. Sister Moon. Cousin Stars.
I receive you as a part of me I don’t know quite yet.
Goddess Moon. Savior Stars. Brother Sun, Sister Moon.

Someone asked me if I believed in God.
I looked around at the nurses and the docs.
Oh yes, I said. I see God all the time.
They couldn’t hear me, so I waved. They waved.
Hello nurses, Gods one and all. Hello Docs.

After my visit, I went up to them.
Told them they are a blessing, a good gift,
in this beautiful broken old world.